WHEN GOD HAS A DIFFERENT AGENDA 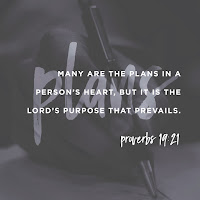 This post was written for Five Minute Friday
Word prompt--PURPOSE
Five minutes to free write about it
---------------------------
This week's prompt made me think of Proverbs 19:21 and the many times I've allowed my faith to waver because things didn't turn out the way I anticipated they would. It wasn't that I was out of God's will, but rather that He had a different agenda in mind, which down the road would prove to be much better than mine.
I don't know if any of you have been following singer/songwriter Jane Marczewski (aka Nightbirde) on the news, but in addition to being the epitomy of faith and courage in the midst of adversity, she is an amazing testimony to how much grander God's purpose and plan can be than anything our finite minds can imagine or think.
During the audition for this season's America's Got Talent show, she received Simon Cowell's golden buzzer for her performance of "It's Okay," a song she had written for herself in the middle of her own dark storm. However, she had to withdraw from the competition when her cancer took a turn for the worse.
On the night of the AGT finale, she posted on Instagram, "I bet you never saw someone win so hard and lose so hard at the same time. This isn't how the story was supposed to go."
The story may not have played out the way Nightbirde wanted it to, but in no way was she a loser. The Lord just had a different purpose and plan than she expected. Once the door had been opened with her golden buzzer performance, He used a much more powerful agenda to create a greater win than she ever dreamed of.
To date, Nightbirde's song, "It's Okay," has been viewed 200 million times, and the numbers keep climbing. More hearts have been touched by its message of hope and encouragement than just being an AGT winner could possibly have done.
Posted by Great-Granny Grandma at 12:07 AM