IT'S NOT OVER 'TIL IT'S OVER

This spring I planted a vegetable garden on my balcony--green beans, tomatoes, peppers, eggplant, cucumbers and radishes.  At first, everything seemed to be going great.  By the beginning of summer, the eggplant was covered in purple flowers, the green beans were starting to grow, tiny cucumbers were starting to sprout, as were a couple of tiny peppers and tomatoes.  I was so excited at the prospect of the bountiful harvest to come, the thought of anything going wrong didn't even cross my mind.

However,  after a handful of beans had been picked, a couple of peppers, and my first cucumber, something peculiar started happening.  Despite the beautifully flowering plants, and no lack of bees to pollinate them, the harvest seemed to have prematurely ended.  No baby eggplants ever appeared, the few tomatoes that grew looked as though the juice had been sucked out of them, and all those little cucumbers that had started to sprout just shriveled up and died.  It was all very puzzling.

I could see there were a great deal of stink bugs around (they seem to be a plague in my neck of the woods) but I thought they were just a harmless annoyance, certainly no threat to my plants.  By the time I discovered they were actually killing them, the damage had been done.

After that, I went after them with a vengeance.  Early in the morning and at dusk I would launch my attack, vacuuming them out of pots, off the trellises, and even off the leaves of the plants they had attached themselves to. 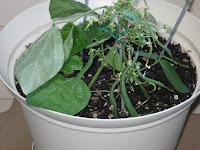 Before I knew it, fall was officially here, and even though all hope of seeing more veggies was long gone, I still kept vacuuming up those stink bugs.  It had become a ritual of sorts, I guess. 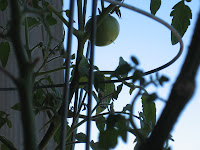 One day, much to my surprise, I noticed some beans in the pot, and a couple of nice, firm toamtoes that had started to grow.  I got to feeling so emotional, I didn't know whether to laugh or cry. 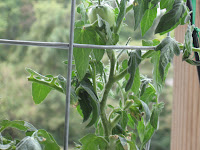 Two thoughts started playing in my mind.  (1) It's not over 'til it's over, and (2) 1 Peter 5:8 - somewhere in the midst of this whole stink bug experience lies an important lesson about not lowering your guard in the face of something that seems harmless enough, lest you be taken by surprise when the enemy gains a stronghold in your life and you fall into his trap (my paraphrase).
I felt sure it was not over for those tomatoes, and that they would mature just as the new beans had, but days passed and turned into weeks, and still they showed no sign of ripening.  And now it's almost November, and the winds are blowing, and night-time frost has been in the forecast for days.  Sadly I decided I had been mistaken, plucked them, and tossed them into a brown paper bag. 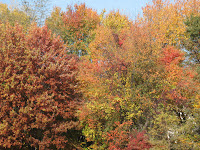 Yesterday I looked at the beautiful view from my balcony, and even while admiring it, couldn't help feeling a tad disappointed that there would be no post entitled IT'S NOT OVER 'TIL IT'S OVER.  A bright red tomato growing in November would have made for an awesome testimony.  But then maybe this was the Lord's way of gently reminding me that He didn't need my help creating testimonies?

Anyway, it was time to start pulling the dead leaves out of the pots and start emptying them.  My granddaughter and her boyfriend will soon be coming over to help me with that task.  Why, Lord, I wondered, did you plant a title in my mind if you weren't going to manifest it?  I was so sure it had been you, and now I feel let down.  Two tomatoes artificially ripening in a brown paper bag don't count.

And then as I disentangled one of the pots and pulled it towards me, I saw it.  The Lord had not let me down after all.  He just chose to make it a surprise. 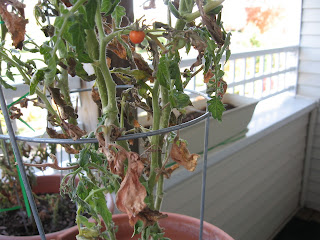 "...since the creation of the world His invisible
attributes are clearly seen, being understood
by the things that are made..."
(Romans 1:20)

View from my window and parking lot.   Enjoy! 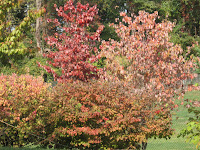 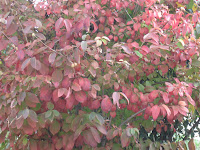 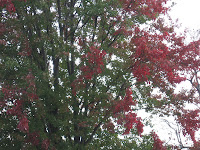 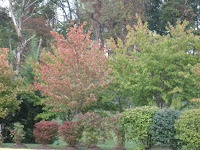 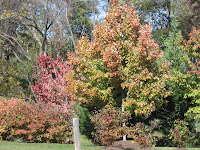 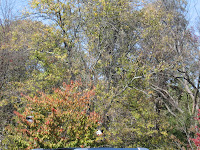 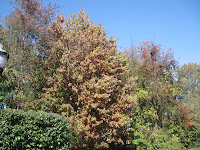 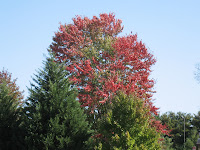 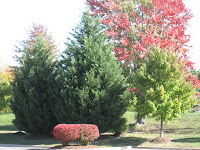 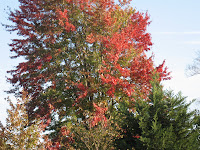 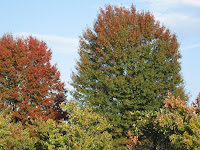 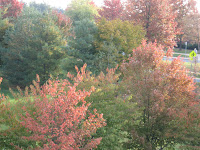 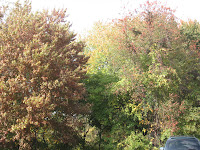 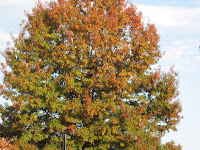