Lately I've been coming across several bloggers celebrating their blog anniversaries. That's something I've never kept track of, but thought it might be fun to look up my first post. So I did--after first taking a trip into the kitchen to see what I could snack on.

About a week ago I went shopping at Trader Joe's. I used to do that quite often until the gas prices went up and I could no longer justify the 27 or so mile (one way) trip. I'd say it's been almost a year since my last visit, and the store layout had been rearranged some since then. So I was walking up and down the aisles checking things out, when I came across a tub of triple ginger snap cookies. That brought back quite a few memories, and I decided to purchase one for old times sake. 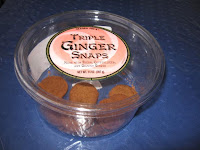 When I got home, it didn't take long for me to discover that they still call my name as loudly as ever, and they were just what I made a beeline for as I entered the kitchen. Then I returned to my computer to look up my first post.

Come to find out next week will mark my second blog anniversary. I wrote my very first post on March 21, 2007. Oh, and guess what the topic of that post was? TRADER JOE TRIPLE GINGER SNAP COOKIES. Talk about coincidence. I hope it gives you as much of a chuckle as it gave me as I reread it.
Posted by Great-Granny Grandma at 8:20 PM 5 comments:

Every day I find e-mails in my In Box telling me I've won the English, Irish, and Canadian lotteries, as well as dramatic sob stories from Africa offering me 60% of a vast fortune if I will help transfer the funds to my bank account in the USA. So it's not surprising that I almost deleted an e-mail from Becky when I saw, "You are the WINNER!!," in the subject line.

At first I didn't recognize her name because I'm used to thinking of her as The Diverse Woman. Plus I had forgotten all about having entered her giveaway. So imagine my surprise when I opened the e-mail and saw that I was a winner, for real.

Thank you so much, Becky, for your very generous $25 Target gift card which I can't wait to spend.
Posted by Great-Granny Grandma at 8:21 PM 3 comments:

Those who don’t know me have misrepresented me (John 8:41-45). I am not distant and angry, but am the complete expression of love (1 John 4:16) and it is my desire to lavish my love on you simply because you are my child and I am your father (1 John 3:1).

I offer you more than your earthly father ever could (Matthew 7:11) for I am the perfect father (Matthew 5:48). Every good gift that you receive comes from my hand (James 1:17). I am your provider and I meet all your needs (Matthew 6:31-33). My plan for your future has always been filled with hope (Jeremiah 29:11) because I love you with an everlasting love (Jeremiah 31:3). My thoughts toward you are countless as the sand on the seashore (Psalm 139:17-18) and I rejoice over you with singing (Zephaniah 3:17).

I will never stop doing good to you (Jeremiah 32:40) for you are my treasured possession (Exodus 19:5). I desire to establish you with all my heart and all my soul (Jeremiah 32: 41) and I want to show you great and marvelous things (Jeremiah 33:3).

If you seek me with all your heart, you will find me (Deuteronomy 4:29). Delight in me and I will give you the desires of your heart (Psalm 37:4) for it is I who gave you those desires (Philippians 2:13). I am able to do more for you than you could possibly imagine (Ephesians 3:20) for I am your greatest encourager (2 Thessalonians 2:16-17). I am also the father who comforts you in all your troubles (2 Corinthians 1:3-4). When you are brokenhearted, I am close to you (Psalm 34:18).

As a shepherd carries a lamb, I have carried you close to my heart (Isaiah 40:11). One day I will wipe away every tear from your eyes and will take away all the pain you have suffered on this earth (Revelation 21:3-4). I am your father, and I love you even as I love my son, Jesus (John 17:23) for in Jesus, my love for you is revealed (John 17:26). He is the exact representation of my being (Hebrews 1:3). He came to demonstrate that I am for you, not against you (Romans 8:31) and to tell you that I am not counting your sins against you (2 Corinthians 5:18-19).

Sorting through some papers today, I came across an old forward someone had sent me about eight years ago. It was at a time when I was struggling with emotionally loaded job-related issues that I kept managing to bumble up over and over again, despite much prayer and best intentions. The e-mail arrived at work on a day that, according to my attached note, "I sat dejected and discouraged at my desk after 'messing up' yet again." I saved it as a reminder of God's grace and unconditional love.

Maybe you have faced some similar struggles? If so, here's hoping this lifts your spirits the way it lifted mine.

Six-year-old Brandon decided one Saturday morning to fix his parents pancakes. He found a big bowl and spoon, pulled a chair to the counter, opened the cupboard and pulled out the heavy flour canister, spilling it on the floor. He scooped some of the flour into the bowl with his hands, mixed in most of a cup of milk and added some sugar, leaving a floury trail on the floor which by now had a few tracks left by his kitten.

Brandon was covered with flour and getting frustrated. He wanted this to be something very good for Mom and Dad, but it was getting very bad. He didn't know what to do next, whether to put it all into the oven or on the stove, (and he didn't know how the stove worked!).

Suddenly he saw his kitten licking from the bowl of mix and reached out to push her away, knocking the egg carton to the floor. Frantically he tried to clean up this monumental mess but slipped on the eggs, getting his pajamas white and sticky. And just then he saw Dad standing at the door.

Big tears welled up in Brandon's eyes. All he'd wanted to do was something good, but he'd made a terrible mess. He was sure a scolding was coming, maybe even a spanking. But his father just watched him. Then, walking through the mess, he picked up his crying son, hugged him and loved him, getting his own pajamas white and sticky in the process.

That's how God deals with us. We try to do something good in life, but it turns into a mess. Our marriage gets all sticky or we insult a friend or we can't stand our job or our health goes sour. Sometimes we just stand there in tears because we can't think of anything else to do. That's when God picks us up and loves us and forgives us, even though some of our mess gets all over Him. But just because we might mess up, we can't stop trying to make ‘pancakes,’ for God or for others. Sooner or later we'll get it right, and then we’ll be glad we tried...