A CLOSE KNIT FAMILY -- OF RAVENS, THAT IS

"Two are better than one, because ... if

Just to recap, though, their nest rests in a sheltered area behind some wires near the top of the structure. which doubles as a transmission tower for the local power company, and because ravens are protected under the Migratory Bird Treaty Act, the birds cannot be disturbed without Federal permission.  Electric company maintenance workers were ordered to suspend all routine maintenance on the tower until the birds leave the nest.

Well, due to a misunderstanding, the ordinance was not strictly followed, and some work was done at a crucial time when mama raven needed to be warming her eggs, and yet, despite this disturbance, a snow storm, and some heavy winds, the nest remained safe and secure on its perch, the eggs hatched, and four babies were born.

As I've watched them grow and learn how to fly, I've been impressed by the way they seem to watch out for one another, and communicate.


They squawk when they leave the nest, and also when they return.  They also sometimes squawk to let each other know where they are.

When the fledglings started testing their wings, there was a great deal of very loud and frenzied squawking which seemed to be a combination of the parents instructing, exhorting, and guiding the little ones through the process, and the little ones excitedly responding as  they discovered they could fly. 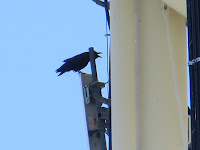 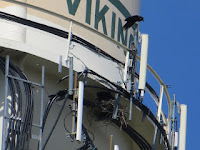 As they got better at it and could go greater distances, the squawking became more subdued.

What I enjoy most is watching the whole family take off together, flying higher and higher until they're way above the treetops, almost out of sight.  Then they spread their wings and just soar around and around in slow circles, gliding on the wind. It is beautiful to behold, and I've been trying, so far in vain, to get a group shot.  It's much easier to capture just one.


Sadly, one of the babies landed on the road and got run over by a car, so now there are only three.

I thought of the Scripture verse at the top of this post when I saw one of the fledglings on the roof of a building in my complex call for help and get rescued by a sibling. 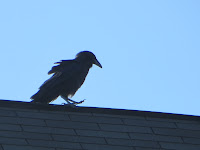 The little bird was hopping about with what appeared to be a limp.  Every now and then it would stop, ruffle its feathers, flap its wings as though getting ready to fly, then bring them back down and hop some more. 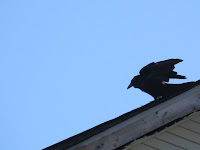 I wondered if it was hurt, or had forgotten what to do next, or maybe both, but didn't have to wonder long because after repeating the process a few times, it just stood there squawking until one of its siblings flew over from the tree it had been sitting in, hopped up next to to it, and they flew off together. 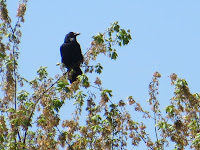 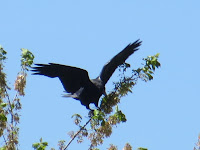 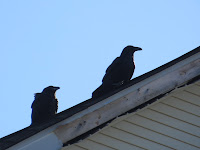 Posted by Great-Granny Grandma at 1:22 AM 3 comments: