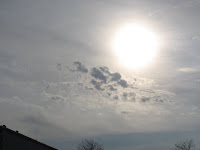 I've never seen the sun's rays flowing upwards before, have you?  I   thought they only flowed downwards and sideways. 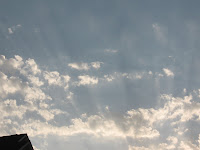 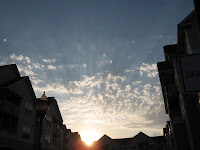 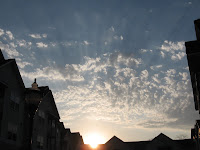 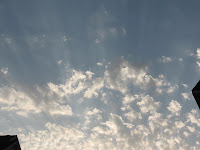 SMOKE IN THE COCKPIT

Just finished reading this message on Ron Hutchcraft's blog this morning, and thought it well worth sharing.  It's called SMOKE IN THE COCKPIT: SOULS IN THE CABIN.

"If you've been flying commercially recently, it's probably best if you were too busy to watch the news. Let's see - there's the plane that suddenly had a hole in the roof - and the ones where they've found cracks since then. Oh yeah, and the plane with the bullet hole in it.

Today I heard about a flight where the cockpit began to fill with smoke, followed by a shutdown of the plane's electrical systems. Systems that power critical systems. Uh-oh. They played the cockpit recording of a pilot radioing the emergency to the tower. He sounded amazingly calm and unafraid. And he brought everyone in safely. I couldn't help but notice his description of the people he was carrying. He told the flight controller that "we have 106 souls on board." Not passengers. Souls.

I first heard that perspective when our family was flying across Alaska with a missionary pilot. As we sat on the runway, waiting to be cleared for takeoff, he said, "Six souls aboard." We weren't passengers. We were souls.

You know, after all is said and done, a "soul" is what we are It's wrapped in an "earth suit" that we need for our relatively brief journey on this planet. Like an astronaut with his "moon suit" - needed for a short time to survive in an environment that requires it But it's temporary. The real person's inside - even after they take off that suit they had to wear.

We spend so much time buffing, beautifying or gratifying our earth suit. And, too often, neglecting the real person inside. Our soul. The Bible's Creation account says, "The Lord God formed the man...and breathed into his nostrils the breath of life, and the man became a living soul" (Genesis 1:7 ). Jesus revealed how much one soul is worth when He asked that haunting question, "What shall it profit a man if he gain the whole world and lose his soul?" (Mark 8:36 ). Cruising for a little while. Lost for all eternity. Because you neglect the one part of you that will be around forever. Your soul.

I'm looking through God's glasses when I look at the people around me and see souls. Not just neighbors or coworkers or teammates, family members or friends. I want to look past the superficial "packaging" and see who they really are - they're ever-living, never-dying souls. People who are future inhabitants of eternity in a place God calls heaven or a place God calls hell.

And we have nothing more important to do with these few earth-years than to prepare for eternity. To make sure our soul is right with God. In fact, it's not. The Bible delivers the bad news that "the soul who sins is the one who will die" (Ezekiel 18:5 ). That's "die" as in being separated from God forever. The problem is that "all have sinned and fallen short of God's glory" (Romans 3:23 ). Even us religious folks - our soul is headed for an unthinkable future.

But God gave us good news that's "gooder" than the bad news. Speaking of Jesus, He says, "Everyone who believes in Him receives forgiveness of sins through His name" (Acts 10:43 ). Jesus did the dying for my sinning. So at the moment I put all my trust in Him, my soul is, in God's words, "saved." The alternative? As Jesus said, "losing my soul."

When you've turned the controls of your life over to Jesus, you're flying with the Pilot who will always bring you in safely. When Jesus counts the souls on board, I hope you'll be with Him."
Posted by Great-Granny Grandma at 9:37 AM 2 comments: