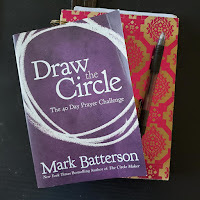 This post is for Ginny Hartzler, who wanted me to expound a little, and for the several others of you who had similar questions.
Draw the Circle is a 40-day Bible challenge I have done several times over the years, and recently felt led to do once again. Each day has a short Scripture, a true story of God's answer to prayer, and prayer prompts, to inspire and encourage us to pray bold, persistent prayers, believe God can do all things, and be observant to see how He is working,
Basically, I read the chapter for the day, write my prayers down in a journal, and then draw circles around them. There's nothing magical about the circles. It just helps me be more persistent.
Nobody joined me this time around. Seems like everyone I invited was too busy. But that's okay. I don't mind doing it on my own, and something new that was not available before, is a daily video you can sign up for that corresponds to the chapter of the day. The videos are short--only about two minutes each, and they are free.
I've enjoyed going back and reading the old journals I kept when I took this challenge before, and seeing how God has responded to those prayers. Many have been answered, although not all of them in the way I thought they would be, and some prayers I am still praying for.
Well, I hope I've answered all your question.
Be blessed,
Sandy
Posted by Great-Granny Grandma at 11:41 PM 7 comments:

I WONDER AS I WANDER 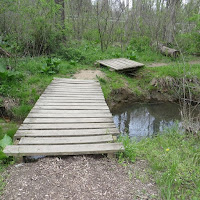 This post was written for Five Minute Friday
Word prompt--WANDER
Five minutes to free write about it
---------------------------------
The moment I saw this week's FMF prompt, the haunting melody and first few words of "I wonder as I wander" started playing in my mind.  It kept repeating itself over and over in continuous play mode as I tried in vain to recall the rest of the words, where I had heard them, or even just what type of song it was. Finally, I gave up and consulted Google.
According to Google, those words belong to an old Christmas hymn written by folklorist/singer, Jacob Niles (1892-1980). It was inspired by the garbled fragment of a song he heard a young girl singing about the wondrous gift of Jesus at an evangelical fundraising meeting he attended in Southern Appalachia.
I wonder as I wander, out under the sky,
How Jesus the Savior did come for to die
For poor on'ry people like you and like I.
I wonder as I wander, out under the sky.
When Mary birthed Jesus, 'twas in a cow's stall
Came wise men and farmers and shepherds and all,
And high from the heavens a star's light did fall;
The promise of the ages it then did recall.
If Jesus had wanted for any wee thing,
A star in the sky or a bird on the wing,
Or all of God's angels in heaven to sing,
He surely could have had it, 'cause he was the king.
Enjoy!
Posted by Great-Granny Grandma at 4:43 PM 13 comments: 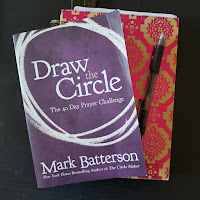 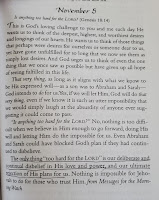 This week's FMF prompt gave me the nudge I needed, and today's devotional in my Streams in the Desert book clinched it.
I've texted the original group of ladies who did the challenge with me to see if any of them want to join me again this time around, but even if no one responds, I'm all in.
Posted by Great-Granny Grandma at 11:44 AM 8 comments: 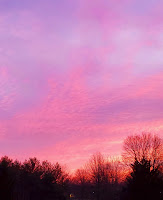 This post was written for Five Minute Friday
Word prompt--MORNING
Five minutes to free write about it
---------------------------------
Morning heralds a brand new day.
No matter how I may have been feeling the night before, mornings are full of hope and anticipation. A time of gratitude for the gift of a new day. A fresh page, a new beginning, one more chance to get things right.
God's mercies are new every morning (Lamentations 3:22-23)
Posted by Great-Granny Grandma at 1:07 AM 7 comments: