BEFORE, AFTER, AND IN BETWEEN 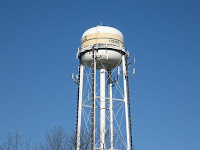 In the early spring of 2013, a pair of ravens flew into town and built a nest near the top of the water tower across from my balcony. 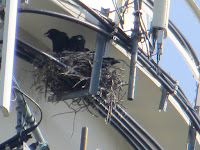 Before long, there were three little fledglings learning how to fly, and the many shots I took of them in the weeks that followed became the inspiration for my first children's picture
book, THE WATER TOWER RAVENS. 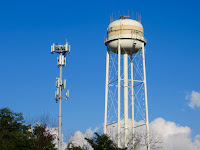 Every spring for the next five years, I looked forward to seeing the new brood, but that fifth year I missed them because I was in the hospital. When I came home, an unexpected sight greeted me--a strange looking structure behind the water tower, which I was told was a temporary cell tower.
The fledglings, now grown, were out and about, and a crew of men were prepping the water tower for renovations and a long overdue paint job. I watched them dismantle antennas and move them over to their temporary quarters. Watching those workers suspended so high was an amazing sight. (If you are interested in seeing pictures of the process, you can click here--Sprucing Up The Tower.) 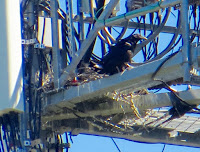 The following spring, when it was time for a new brood, the ravens built a nest in a corner of the temporary tower, and I learned some important lessons, which I posted about in Lessons from the Ravens. Not only was it more spacious and sheltered than the spot where their original nest had been, but the secluded area below it was a safer place for the fledglings to land on when learning to fly than the road below the water tower had been. 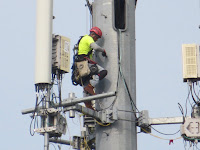 Here they stayed for two more breeding seasons, until the work on the water tower had been completed and it was time to move the antennas back.
Unawares that they were about to be evicted once again, the ravens seemed unperturbed. They watched the goings on from a safe distance during the day, and settled back into their corner for the night once the workers were gone. 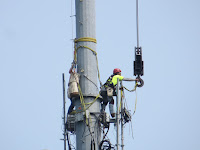 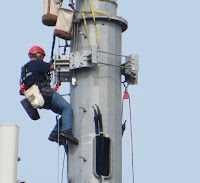 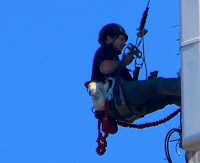 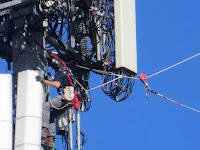 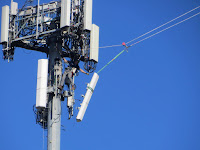 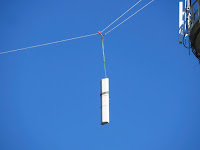 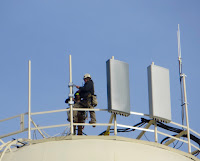 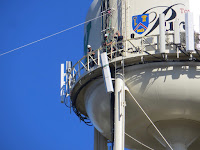 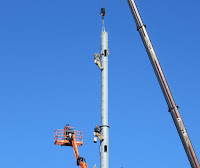 After the antennas had all been moved, there was an almost two month hiatus before the workers returned to dismantle the temporary tower. I had been keeping careful vigil so as not to miss the event, but the top was removed the one day I was out. I hear it was lifted off in one piece. What a great shot that would have been, and I was so disappointed to have missed it. I did, however, make it back home in time to see the rest of the tower being taken apart section by section. 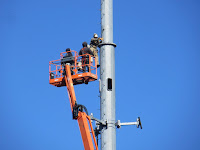 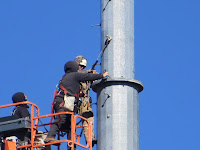 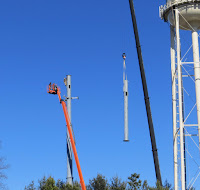 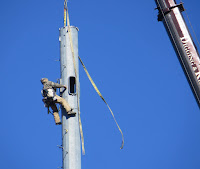 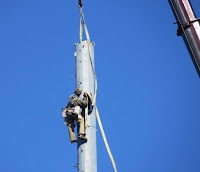 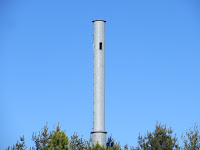 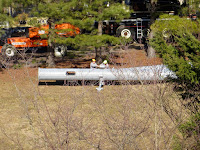 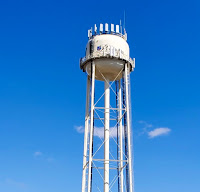 The ravens had very short notice to find a new place to lay their eggs, but they must have, because it was suddenly very quiet. Given a little more time, they probably would have built a nest on the water tower again. I really miss them.

Posted by Great-Granny Grandma at 4:49 PM