This week Brenda gave us a fun assignment. She told us to create a time capsule we can hopefully "all open together in a year and marvel at our progress!" So I did, and here is what I put in mine: 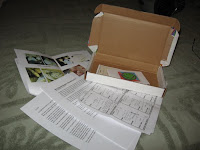 But I also want to share about a revelation I had this week. It all started when I read Debbie's FF post in which she mentioned a free online study called The Lord's Table. I was curious to see what it was about, and so I checked it out, was interested in pursuing it further, and signed up so I could try it out.

It is a 60-day study you do with a mentor, and I'm not quite sure how to describe it. It's not a diet, or a food plan, or even about food as we think of it, but I can see how an overweight person would lose weight by the end of the study. The focus is on spiritual food, and feasting at the Lord's table.

Now I've known all along about the Word being spiritual food that noursihes our soul, but I think that was head knowledge, as opposed to heart knowledge or I would have made my time in the Word much more of a priority. I mean, it is a priority, and I do intend to spend more time in it every day, but things happen, and before I know it the day is over and much of that allotted time has been eaten up by other stuff. No matter how I plan, my days seem to escape me.

Well at some point this week a veil must have been lifted because it suddenly dawned on me that almighty God, the creator of the universe, was inviting me to come feast at His table. What an awesome privilege. And here I am letting other things stand in the way. What if this were the President of the United States inviting me for dinner, or the Queen of England, or some other prominent person? Is this how I would respond to their invitation? There's what I would call some good food for thought.

Posted by Great-Granny Grandma at 9:07 AM