BATTLE OF THE ANTS

For several days last week, the left portion of my kitchen counter bordering the sink, as well as the lower left portion of the window frame and sill behind it, were laid siege to by a swarm of teeny tiny ants marching up through the drain.

After the initial shock wore off, a battle plan was put into action. Baking soda mixed with vinegar was poured down the drain, followed by pots of boiling water, and for a few short hours it seemed to have worked. The victory was short lived, however, and the swarm reappeared with gathered forces.

More baking soda and vinegar were poured down the drain, followed by even more pots of boiling water, but by the end of the day a new battalion was steadily marching up the drain.

I repeated the procedure a third time, and still the troops kept escalating, so on to Plan B, which was to put bay leaves in and around the infested areas. This proved to be a total waste of time, and didn't daunt them one bit.

At this point I turned to Google (which is probably where I should have started), and was informed that whereas my previous strategies had been good, there could be no long lasting results until the queen had been destroyed. I didn't know ants had a queen. My visiting granddaughter assured me that they did. So now how to go about toppling her from her throne?

After surfing through various sites for new strategies, I decided on the following. 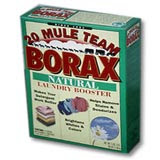 Mix 1 cup of warm water with 1/2 cup of sugar (I used brown since it's all I had available), and 2 tablespoons of Borax. Then soak the mixture up with cotton balls and place those cotton balls near any trails the ants have established.

I placed the cotton balls in strategic places along the counter, window sill, and ledge behind my sink. Then I turned off the light and went to bed.

The next morning, I could hardly believe my eyes. No trace of an ant anywhere. All was still, and my kitchen resembled a ghost town dotted with mini mountain peaks of brown sugar fudge. The battle was over, and I had won!
Posted by Great-Granny Grandma at 4:05 PM