AND YOU THOUGHT I WAS A WEED

Several posts ago I showed a picture of the little tomato death camp survivor I had adopted. A well-intentioned friend told me it didn't look like a tomato plant to her, and this view was confirmed by some chuckling neighbors who found it amusing that I should be spending so much time and energy on what looked to them like a fast growing weed. Even I was starting to have some doubts, but continued nurturing it anyway. 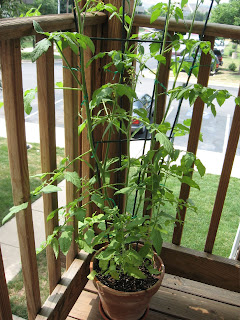 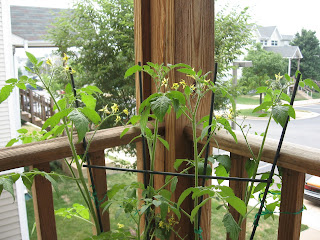 Well, as you can see, it is a tomato plant after all, but maybe an overly coddled one, for it's not near as fruitful as it's more neglected sisters and brothers still at the camp.
Although it has grown big and tall, and is covered with many little yellow flowers, only one tomato has shown up so far. And who is that strange bug lurking in the background? He seems to have taken up residence on the railing--sometimes on one side, sometimes on the other. Hope he's not waiting to take the first bite. 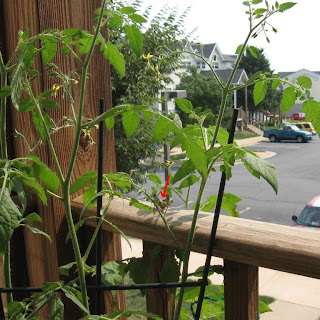 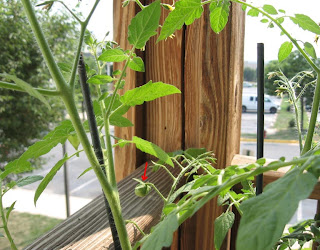 Posted by Great-Granny Grandma at 11:42 AM