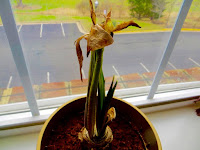 Three Christmases ago, a friend gave me an amaryllis that was full of surprises. It had tried to bloom while still in the box, and when I took it out to be potted, the bulb had already grown a withered looking flower. What a disappointment that turned out to be. 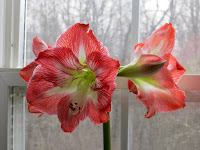 The leaves continued to grow for a while, but no more bulbs emerged. Eventually, even the leaves turned brown and died. That, however, was not the end of the story.

Two years later, a new shoot suddenly appeared, and practically overnight, my plant was transformed from dud to four-flowered beauty.  (If you are interested, there is a post--Never Say Never--on my picture blog that documents the process and has many pictures).

Eventually the amaryllis plant got top heavy, and no amount of propping or turning it to face the light could keep it upright, so I cut off the flowers and put them in a vase, where they flourished for another week. 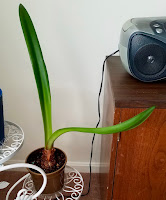 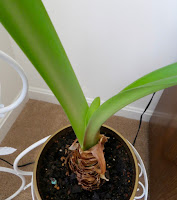 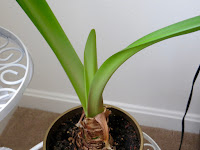 Can't wait to see what happens next.
Posted by Great-Granny Grandma at 6:19 PM