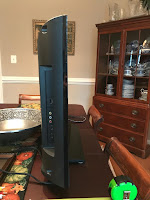 This post was written for Five Minute Friday
Word prompt--EXPECTATIONS
Five minutes to free write about it
---------------------------------
I was not planning on participating in this week's challenge, but the word prompt provides such a perfect segue to the testimony I was about to share, here goes.
*   *   *   *   *   *   *   *   *
My expectations rarely play out the way I expect them to. Sometimes things turn out better, sometimes worse. This testimony is about a blessing I almost missed out on because my expectations were all wrong. But God...
I had a very old, bulky, tube TV with the big back, from days long before flat screens came on the market. Mostly I used it to watch DVDs, VCR tapes, and my Wii Fit, all of which were hooked up to it. When it finally died, I thought I would need to replace it with something similar because I didn't realize that newer model TVs also have ports you can plug jacks into. So I posted a want ad on Freecycle asking for an old model TV that had these ports, and included a picture of what mine looked like.
The first response was from someone who was out of town, but would be back in a week, so we made arrangements for me to stop by when they returned. Meanwhile, I got another response from a lady who wrote, "I have exactly this. We just upgraded." So, what to do? Wait for the first person to get back, or get this one? I decided to go with the new offer if I could find someone to help me with the lifting. And so started a series of e-mails between us that I will only just give the gist of:
Me (with the expectation that this was another big, bulky, heavy TV): I'll come as soon as I can find someone to come with me and do the lifting.
Lady: It's not that heavy.
Me: I can't find anyone, so I'm going to pass. P.S. I'm 82 years old, and just about everything feels too heavy.
[At this point, most people would have let it go at that, but this lady was persistent.]
Lady: I can help get it to you. Where do you live?
Me: That's really kind of you, but I'm still going to pass, and research other options that aren't so big and bulky.
Lady (thinking I was afraid to have her bring it to me): I understand you not being comfortable having a stranger in your house, but I'll hold on to it for a week in case you change your mind.
Me: Oh my goodness, I was not worried about you coming to my apartment. I was telling you the truth about having changed my mind about getting another big, bulky TV.
Lady (sending me a picture): I guess I'm not giving up. This TV is not bulky. When I saw your ad, I had just been telling my son that I'd like this to go to someone who can use it. Not someone that just wants a 4th TV.
Wow! Who would have thought. Did God plan the timing of this whole scenario or what?
And now my five minutes are up, but I need to add a P.S.
*   *   *   *   *   *   *   *  *
P.S. God is so amazing. I'm always in awe at the way he orchestrates things down to the most minute details.
When I picked up the TV, the lady and her husband loaded it into my car for me. It is beautiful beyond my wildest expectations. Nothing like what I had before. The screen is 31.5" wide (about three times bigger than the old one), and it's only 8" deep, so pretty close to a flat screen. And when I got home and got out of my car wandering how I would get it up to my second floor apartment, a guy just happened to step out onto his patio for a smoke. I asked him if he would be willing to carry it up for me, and he was most happy to oblige.
And now for the final detail, which could only have been masterminded by someone who knew the beginning from the end.
When I went shopping for Christmas cards this year, I picked out several for people who have been special blessings in my life, and somehow, one of the nicest ones was wound up getting left over after I finished addressing everyone on my list. I couldn't understand how that could have happened, but now I do, and can just imagine God smiling a big smile and giving me a huge wink.
Posted by Great-Granny Grandma at 1:44 PM