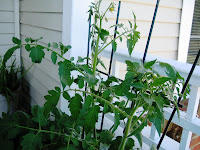 On Mother's Day, my daughter gave me a seedling tomato plant that I nurtured on my windowsill for several weeks.

When it seemed big enough and strong enough, I transplanted it and moved it to my balcony, where it really took off.


By July, the leaves were looking thick and healthy, and there were many flowers on it, but none of the flowers turned into tomatoes. They just bloomed, and then dried up and died. 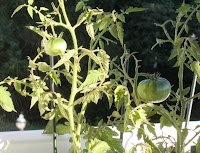 However, in August, when I was about ready to write this plant off, one tomato started to grow, and by September, a second one had joined it, and I eagerly awaited some sign of ripening.

Summer turned to Autumn, the stink bugs attacked, and still they were green.  I was told they would never ripen now.  If the cold didn't kill them, the stink bugs would.

I couldn't do anything about the weather, but I did go after the stink bugs with a vengeance, using my trusty vacuum cleaner as a weapon.

And then a miracle!  At the beginning of October one tomato's appearance seemed to be changing.  Only a day later, the signs of ripening were clear. 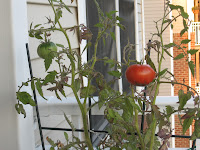 By the end of the week I had a beautiful red, ripe tomato, ready to be picked.