WHO WOULD HAVE THOUGHT? 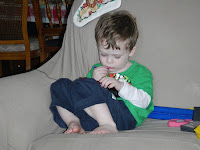 Many, many years ago I worked as a programmer on an IBM 360.  It was a giant of a computer that required it's own little room, and as I stood there feeding it data on keypunched cards I would wish that some day somebody would invent a computer small enough that I could have one at home.

Who would have thought back then that that day would really come, and that when it did, technology would slowly start to snowball?

Who would have thought that I would one day find myself living in a high tech world where even my youngest grandson is more tech savvy than me?
Posted by Great-Granny Grandma at 10:19 PM